Reported via mobile in the Potholes / Highway Condition category anonymously at 16:07, Thursday 30 June 2022

Sent to Northamptonshire Highways less than a minute later. ref: 3637460. 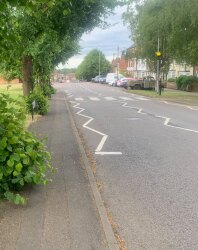 The Zebra crossing in question is on the B569 Wollaston Road, Irchester, close to the junction with Berrill Street (see Google location map attached).

I have personally experienced two scenarios this month at the crossing, whereby I would have been on Northants Police KSI figures, had I not had the nous to recognise there was a danger.

Approx 08:30 hours on 9 June, I was walking my dog and approached the crossing from the Berrill Street (southern) side. I waited and a vehicle travelling from west to east, slowed and stopped for me. However, a vehicle travelling in the opposite direction, failed to afford precedence to me and drove straight through the crossing. Naturally, I was not impressed, and I shouted at the driver. I saw brake lights briefly illuminate, but the vehicle continued its journey.

Approx 20:15 hours on 28 June, I was again walking my dog and approached the crossing from the recreation ground (northern) side. I waited and a single vehicle approached from the east. I instantly knew that this vehicle would struggle to stop, so I did not move. I made my frame even larger by spreading my arms out to the either side and shouted my dismay at the driver. With this, he braked heavily, and I could hear the parcels being thrown about in the back of the van. The van stopped just short of the crossing.

On 9 June, I telephoned both NNC and WNC and was told that the foliage around the beacon, on the recreation ground side of the crossing, would be cut, to date this has not happened.

However, this is NOT the entire problem. I believe that the amber beacons are not visible enough, because (a) they are not bright enough and (b) because they do not protrude far enough out from the vertical black and white poles. They need an extension on the bracket to make the beacon more visible and have an amber LED attached to the top of the beacon cowl.

This is a matter that requires URGENT attention and not just cutting the foliage back.

I would be very grateful if you would investigate at your earliest convenience.

Thank you in advance for your help.

PS I have attached a photo of the beacon on the recreation ground (northern) side, to show that the beacon does not protrude out far enough.

I have also attached a photo of the crossing from a short distance away, showing that the near side beacon cannot be seen.